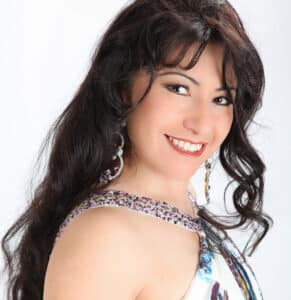 Young artist, born in Bolivia, studied in the National Conservatory of Music “Maria Luisa Luzio”, which she attended for Four years receiving her formation as a singer. Her incursion into the field of music and singing began at an early age, performing in children’s radio programs.

In October of 1987, she made her first appearance on Channel 5 as a special guest of the channel station. Rosario Arce participated as a soloist in the XI Festival of the Bolivian Song, receiving much praise from both print and broadcast journalists, as well as from political figures. was declared to be “The New Talent of 1987”.

In 1986, Rosario Arce begins her career as an actress in Bolivia, performing as the main character in several theatrical plays. In her performance, she combined dancing and singing which captivated the audience.

Rosario Arce, designs her own outfits which accredits her to be the most elegant Latin American singer by the print & radio journalists in Toronto.

Rosario Arce has participated in 6 shared record productions, and 3 individual productions titled: “From an Open Heart”, “The best of Rosario Arce” and “The Last Kiss”.

Rosario Arce is presently preparing a touring in Bolivia y USA with her new upcoming CD called: “The Last Kiss”.